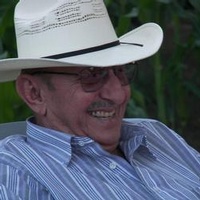 On Thursday, October 20, 2016 Richard "Dick" Glen Howard 91, of Buhl, Idaho went gracefully into the arms of his Lord and Savior surrounded by loved ones in his home in Twin Falls, Idaho. Dick was born at home on the family farm Southwest of Buhl on February 10, 1925 to Luther and Amanda (Ahrendsen) Howard. When Dick was 15 years old, and in the 9th grade, his father suddenly passed away which left him the man of the house. Being the eldest son, Dick quit school to help his mother with the farm along with his three sisters and two brothers. This set the stage for his hard working lifestyle and love for farming and ranching. In 1948, Dick married Nelma Faux. Soon after they traveled to Texas where they began their farming career. After two years in Texas they returned to Idaho. Dick farmed in Murtaugh, Idaho for ten years before returning to Buhl where he and Nelma established and operated Howard Angus Ranch. In their many years of marriage they raised their daughters and lived the true farm life. Their days consisted of rising long before the sun and ending long after it had set. During those precious hours many memories were made and will be cherished always. Dick and Nelma were married for 43 years.
One of the most important aspects of Dick's life was being an active part of the 4-H community. Dick led the Sunnyside Beef 4-H Club. All four of his girls, as well as many other members, showed cattle under his leadership. Dick was always there supporting and cheering them on through their highs and lows. His unconditional love and support was always present and was felt through his tight hugs and radiating smile. In his later years Dick met Cathy (Conlon) Howard while working as a ditch rider for the Twin Falls Canal Company. They married on August 15, 2001. During their 15 years of marriage Cathy cared for and loved Dick flawlessly and selflessly. Their life together was a full one. They enjoyed traveling, whether it was a fishing trip to Alaska or a countryside drive. They simply enjoyed the company of one another. Dick was a master at welding and woodwork. One of his greatest passions was tending to his garden and sharing the fruits of his labor with friends and family.
Dick was preceded in death by his mother, father, siblings, Jean (Eugene) Robertson, Phyllis (Arnold) Robertson, Geraldine White, Bob (Jane) Howard and Don Howard and nephew Calvin Robertson.
Dick is survived by his wife, Cathy Howard; children, Luann Howard, Sidney (Todd) Howard-Fahner, Deanice Howard, Cara (Darren) Bonnes, Michael (Becky) Rice; grandchildren Beau (Heather) Hudson, Aaron (Diana) Fritz, Amanda (Josh) Wells, Ashlei (Quinton) Ryan, Hannah (Patrick) Neitzey, Austin Hudson, Darbie Dean, Quinn Dean, Lizzy Rice, Josh Rice and nine great-grandchildren.
He is also survived by Jack (Geraldine) White and Carolyn (Don) Howard as well as many beloved nieces and nephews and two of his most loyal companions, his pets Maggie and Whiskers, who never once left his side and brought such joy to his life.

Our family would like to sincerely thank Andrew and the crew at Lifestyles Physical Therapy as well as the many caring hands at Idaho Home Health and Hospice, specifically Marcia and Robert; also Pastor Greg and Pastor Ron from Lighthouse Church and Tripp Family Medicine. Your kind and loving care was greatly appreciated and will never be forgotten.

To order memorial trees or send flowers to the family in memory of Richard Howard, please visit our flower store.