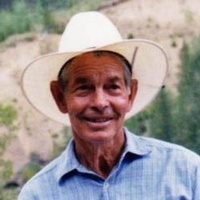 Robert LeRoy Eggleston, 96, of Buhl, peacefully passed away on Tuesday, March 24,
2015 at his retirement home in Eagle, Idaho.
Robert (Bob) was born February 23, 1919 in Rogerson, Idaho to Earl & Minnie Eggleston.
Robert completed 8th grade at Lucerne school. He worked with his father on the family farm in Lucern until they moved to Buhl in 1942 and lived in the McCullum area.

Robert married the love of his life, Gloria Reichstein, on August 28th, 1942. Robert worked at the trout farm after they married and then worked at a farm at Fairview for Rowland Harding. He also worked at different Magic Valley farms until he returned to the Thousand Springs Trout Farm until his retirement.

Robert enjoyed hunting, camping, archery, bowling and spent many hours in his shop building clocks for friends and family. He was also very active in the Buhl Masonic Lodge and later became a Shriner. He was a member of the Methodist Church and was very avid in donating blood in Buhl until they no longer would take him. He received his 12 gallon pin.

He was preceded in death by his parents; 7 brothers and 4 sisters and his oldest son, Gerald Eggleston.

In lieu of flowers, at the family's request, donations can be made to the
Shriners Hospitals for Children - Salt Lake City, Fairfax Road at Virginia Street
Salt Lake City, UT 84103

To order memorial trees or send flowers to the family in memory of Robert Eggleston, please visit our flower store.