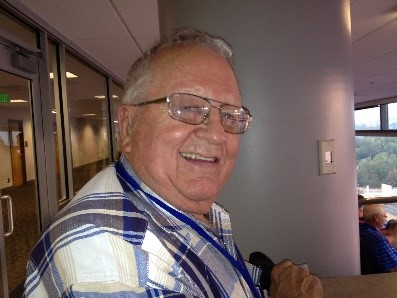 Robert Ray Howard passed away May 18, 2016 in Meridian, Idaho.  Bob was born April 17, 1937 in Twin Falls, Idaho to Thelma Daiss Howard and Leonard Ray Howard of Buhl, Idaho.   A brother, Donald, joined the family in 1943. During summers, he worked in the family business, LR Howard Electric, wiring many of the businesses in the Magic Valley.

The family enjoyed camping trips to the Smokey Mountains each summer. Bob was an accomplished classical pianist. He especially favored the music of Scott Joplin. Bob and his dad spent many enjoyable times as part of the Tverdy family band, playing for dances at the Moose Hall in Buhl. He majored in music at the University of Idaho, graduating in 1960. After a stint in the National Guard, Bob returned to the University to get his elementary teaching degree and then his master’s in educational administration in 1965.

He married Marilyn Pritchett of Mackay, Idaho in 1960 and they had two daughters, Laura and Linda. Bob and Marilyn divorced in 1986.  Bob taught grades 4 through 6 in Pocatello, in Kahlotus, WA and later in Howe, Idaho. He was an elementary school principal in Royal City, Washington and for more than 20 years in Arco, Idaho. When the family moved to the Lost River Valley in 1970, Bob was introduced to the sport of snowmobiling which he loved. He also earned his pilot’s license and enjoyed flying during his years in Arco.

Upon retirement, Bob moved to Meridian, Idaho to live near his daughters.  He was the most patient, caring, and understanding father two girls could have ever asked for.  He took us snowmobiling, skiing, fishing, camping and hiking.  Dad loved anything with an engine and took great care of all his machines making sure that his grandson’s cars were always in good running order.   Dad was the official U-Haul driver for our many moves and there wasn’t a party that he wouldn’t be first in line for.

He greatly enjoyed his retirement years. He was active in the Treasure Valley Singles group where he met his partner, Mary Wood in 2008. Together they toured many sites in Europe, the Americas, Asia, the Holy Land, and Australia.

Bob was preceded in death by his parents; and his daughter, Linda.  He is survived by his daughter, Laura (John Reardon) in Meridian and Linda’s husband, Brent King, and grandsons, Jess and Ryan King, in Boise; and his brother, Don (Joan) of Salem, OR.

Graveside services will be held at 1:00 pm, Saturday, June 15, 2019 at the West End Cemetery, in Buhl, Idaho. In lieu of flowers, the family asks that you send donations (in Bob Howard’s name) to the Eagle United Methodist Church, 651 N. Eagle Road, Eagle, Idaho 83616.

Memories and condolences may be shared with the family on Bob’s memorial webpage at www.farmerfuneralchapel.com.

To order memorial trees or send flowers to the family in memory of Robert Howard, please visit our flower store.