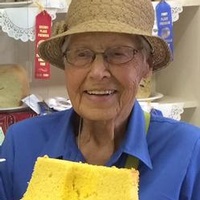 Rosemary Mathews passed away peacefully in her home on August 4, 2016
Rosemary was born on July 24, 1923, in Arlington, Washington, to John and Sena Wrage. She spent her childhood on the family dairy farm with her two sisters and one brother. After graduating from high school she moved to Seattle to attend seamstress school.
When WWII began she went to work in the Bremerton Navy Yard insulating steam pipes. It was there that she met her future husband, Lee Mathews. They were married in 1944. In the spring of 1950 they and their two daughters moved to Buhl, Idaho, to begin a farming career. That fall their son was born to complete the family.
Rosemary was very proud of her 4-H sewing and cooking clubs and became an accomplished seamstress herself winning the "Make it with Wool" contest in 1967 earning her a trip to New York City. Rosemary was a mail carrier for 20 years, but her true love was her vegetable and flower gardens. She spent countless hours weeding and watering her gardens, and with her husband Lee, managed a u-pick strawberry farm.
Over the years Rosemary became a world traveler, having traveled to, Alaska, Africa and many sites in the US.
Please note there will be one less "Sunshine Cake" entered in the Fair this year, but not to worry- her daughter-in-law and great granddaughter were canning beans the other day, so the world will carry on.
Rosemary enjoyed following her grandchildren and great-grandchildren to their activities, sports, theater, school plays, and music recitals. She was their greatest fan and supporter.
Rosemary was loved and respected by her family: her children, Judy (Lyle) Lierman, Jill (Bob) Turner, Don (Mary) Mathews; grandchildren, Wendy (Steve) Barckholtz, Daryl (Angela) Lierman, Angie Turner, Lacey (Eric) Risdal, Haley (Troy) Drinkard, Seth (Amber) Mathews; great-grandchildren, Riley, Bodie, and Kaylee Lierman, Zane and Mallory Barckholtz, Jordynn and Lance Risdal, Colton and Braden Drinkard, Lauren and Patrick Mathews and numerous nieces and nephews who have many good memories of time spent with Rosemary.
Rosemary was preceded in death by her parents, two sisters and one brother and her husband Lee.
Donations in Rosemary's name may be made to: Hospice Vision's (1770 Parkview Dr. T. F. 83301) or to The Clover Christian School (3552N. 1825E. Buhl 83316).
The family invites you all to attend a Memorial Service and Celebration of Rosemary's Life in her front yard (4456N 1900E) on Sunday, August 14, at 4pm. In her fashion, we'll be frying hamburgers and hot dogs and enjoying homemade root beer.

To order memorial trees or send flowers to the family in memory of Rosemary Mathews, please visit our flower store.