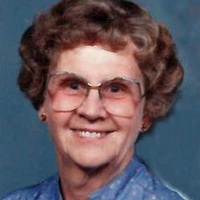 Ruby Lou Quigley, age 94, of Buhl, passed away on December 31, 2016, due to reasons of advancing age, while a resident of the Grace Assisted Living Center in Twin Falls.

Ruby was born February 20, 1922 in Filer, Idaho, the daughter of Shelby Ernest Williams and Lora Mabel Williams. She grew up on family farms in the Filer and Buhl areas and was a 1940 graduate of Buhl High School. After high school Ruby entered business school in Boise, and continued to work and to study in Boise throughout the years that the United States was engaged in World War II.

On January 14, 1946 Ruby married Raymond E. Quigley of Buhl. They returned to Buhl to live and to start their family. Ruby and Ray both lived to celebrate their 70th wedding anniversary together on January 14, 2016. Ruby was a long-time active member of the Buhl First Christian Church, serving in many capacities within that church. Her deep and abiding Christian faith, which she quietly and effectively shared with all, serves as one of the greatest legacies of her long life.

Ruby was also an active participant in all aspects of the family's farming and ranching operations. She frequently mentioned that at this time of year, after our cattle had finished "calving-out" in the fall, one of the things she loved most was being able to look out through our dining room picture window while she worked at other household tasks and watch those baby calves "run and frisk" in the snow that always seemed to cover our pasture during those wintertime years.

After the death of her father-in-law, Charles Quigley, Sr, in 1969, Ruby also added the bookkeeping duties at Quigley Plumbing to the many family tasks that she undertook and handled without complaint. When the need arose, she also worked as an assistant to Lyman Caughey and Alice Strickland at the former BeanGrower's Warehouse in Buhl.

Ruby was also an active supporter of her children's activities during the years they were growing up in the 1950s, 60s, and 70s, and she served as an active leader in 4-H, Scouts, and school PTA. No one who ever went for a car ride with Ruby during that time ever forgot the encounter. Whether Ruby was gathering every neighborhood child for "dollar-a-car" night at the Moon-Glo Drive-In; or was taking a "short-cut," through the desert on a group Sunday Excursion; or "flying" down Highway 93 to deliver supplies during the fall cattle roundup, the experience was always memorable - and later, hopefully, one we could all laugh about.

Family was at the center of Ruby's life, and while there was always a lot of hard work involved, every summer in the early 1960s, during the family's annual vacation at Stanley Lake in the Sawtooth Mountains, she would always take one obligatory trip around the lake on water skis - but only after putting on nearly every life jacket the family owned!! Ruby always had time for a visit, or to extend a friendly word of greeting or to offer a meal of welcome to a newcomer.
In later years, after their children were all grown and well-started in life, and with the cattle and farm sold, and the plumbing business closed, Ruby and Ray enjoyed spending many winters in the warmer climates of Arizona and California.

Ruby loved her family - was loved in return - and will be dearly missed. She is survived by her daughter Lora (William) Segura, son Keith (Kim) Quigley, and son Gary (Kristin) Quigley, four grandchildren, and four great grandchildren. She was preceded in death by her husband Ray, by her son Philip, and by her brothers Shelby Williams and Sam Williams.

A memorial service is planned at 11:00 a.m. Thursday, January 19, 2017 at the Farmer Funeral Chapel in Buhl. In lieu of flowers, memorials may be made to St. Luke's Home Care and Hospice of Twin Falls, or to the Mustard Seed Wellness Clinic in Twin Falls.

To order memorial trees or send flowers to the family in memory of Ruby Quigley, please visit our flower store.