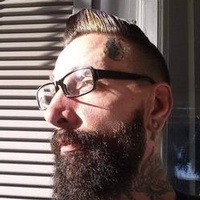 Rusty passed from this world on January 8, 2017. He was born in Twin Falls, Idaho to Cindy and Dave Braaton on August 7, 1980. He had a big sister, Aime, and a twin sister, Cricket, who was born six minutes before him.
Early in life we recognized that Rusy had an extreme artistic ability. He attended Buhl schools and made many friends, many who have remained his friends till his passing. Rusty enjoyed snowboarding, skateboarding and, of course, his art.
In 1993, Rusty's mom married Rocky Finney and Rusty got two more brothers, Dana and Lance.
At age 18, Rusty began his tattooing career. He created many different works for everyone to enjoy, using not only ink, but chalk, pencils, acrylics or anything he could get his hands on.
Rusty and his partner, Sonya Pulgado, welcomed their daughter, Sunset Echo, into the world on September 23, 2007. Sunny was the pride of Rusty's life. He loved her immeasurably.
Rusty had recently met and fell in love with Amity Quin. She brought great joy into his life.
Rusty leaves behind his mother, Cindy Finney; grandmother, Clarice Corthell; father, Dave (Paula) Braaton; brother, Lance (Sarah) Finney; sisters, Aime (Jarod) Muntz and Cricket (Scott) Gereats; many nieces, nephews, cousins and thousands of friends from all over the country.
Rusty was preceded in death by his brother, Dana Finney, niece, Dana Zen Finney; cousin, Bert Peterson; step-father, Rocky Finney and his grandparents.
A memorial service has been scheduled for 4:00 p.m. on Friday, January 13, 2017 at Calvary Chapel in Buhl. Anyone who cannot attend the service can view it live at calvarychapelbuhl.com.
Arrangements are under the direction of Farmer Funeral Chapel of Buhl, Idaho.

To order memorial trees or send flowers to the family in memory of Russell Braaton, please visit our flower store.