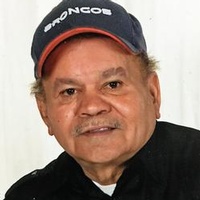 Teodora was born on November 15, 1943 in Piedras Negras, Mexico.
At the age of 18, Teodoro joined the military in Mexico, in which he served for several years. He then worked as an agriculture laborer for the majority of his life. He loved to go fishing and hunting, but most of all he loved to be in the presence of his family.

Teodoro is survived by his wife, Esther Garza; his two sons, Jesse Hernandez and Teodoro Garza Jr.; his three daughters, Norma Solis, Marie Barajas and Olivia Garza, and his 13 grandchildren.

His laughter, smile, jokes, and stories will be forever cherished by his friends and loved ones. We love you and miss you greatly.

Psalm 34:17-19;
17 The righteous cry, and the Lord heareth, and delivereth them out of all their troubles. 18 The Lord is nigh unto them that are of a broken heart; and saveth such as be of a contrite spirit. 19 Many are the afflictions of the righteous: but the Lord delivereth him out of them all.

To order memorial trees or send flowers to the family in memory of Teodoro Garza, please visit our flower store.