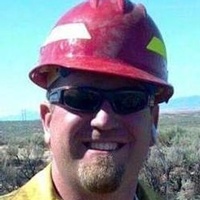 Terry "Tyke" Kenneth Sonner, 33, passed away Wednesday, June 10, 2015, while on duty at the Bureau of Land Management Hammett Guard Station. He was the husband of Amanda Sonner and together they shared four years of marriage.
Born in Twin Falls, Idaho, he was the son of Terry Barton Sonner and Kathleen Mary Walker. He attended Buhl High School where he was a state champion wrestler for the class of 1999 and from there he went on to wrestle for Boise State University. Tyke also obtained an Associate's Degree of Fire Science from UNLV. He was a veteran of the BLM for 14 years working out of Twin Falls, Elko and Boise. Tyke was promoted to superintendent and moved his family to the community of Wendell at the end of May.

Along with the passion Tyke had for firefighting for the BLM, he also took great pleasure in coaching his sons in wrestling. Tyke's hobbies were hunting and fishing and he enjoyed being around his family a great deal. His hard work and dedicated mindset paired with his infectious smile and sincere temperament impacted the lives of countless people.

Tyke is survived by his wife, Amanda; children, Miccael, Preston, Kinsley; and stepchildren, Madison Tipton and Blayden Lowry. He is also survived by his brother, Eric (Christina) Sonner and their children, as well as his stepdad, Richard Walker, and sister, Sarah Walker.

Memorial donations can be made at gofundme.com by searching for "Sonner Memorial Fund" and floral arrangements can be sent to Farmer Funeral Chapel.

To order memorial trees or send flowers to the family in memory of Terry Sonner, please visit our flower store.