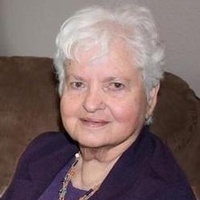 Virginia was born in Twin Falls on December 6, 1933, to Craig and Olive Casebeer. She attended school in Berger, Fairview and Buhl, graduating from Buhl High School in 1951. She attended Twin Falls Business College and worked for JJ Newberry's and Barnard's Auto in Twin Falls.

She married Jim Wheeler on June 22, 1952. She and Jim farmed together in Castleford for over 30 years, retiring in 1983. They wintered in Florence, Az., until January 2017 when ill health forced their return to Idaho.

Virginia's entire life was her grandchildren and great-grandchildren. She loved to read to them and listen to them read. She was often found up to her elbows in paint or another craft, sewing or cooking project with one of her grandchildren. She referred to her first great-granddaughter, Kynzi, as "Sugar Pie" and Kynzi started calling her "The Sugar Pie Grandma." This evolved into friends and family calling Virginia "Sugar Pie." Sugar Pie was known for being a sweet and kind soul. Even when her health declined, she crocheted and donated thousands of hats for local children in Idaho and Arizona.

She was preceded in death by her parents and sisters, Merle (Bill) Curtis, Leila (Del) Smith and Golda (Jim) Wray.

In lieu of flowers, the family suggests memorial contributions to the First Baptist Church (400 9th Ave. N. In Buhl).

A funeral service will be held at 2 p.m., Wednesday, October 4, 2017 at the Buhl First Baptist Church. Interment will follow the services at Buhl's West End Cemetery. Funeral arrangements are under the direction of Farmer Funeral Chapel in Buhl.

To order memorial trees or send flowers to the family in memory of Virginia Wheeler, please visit our flower store.