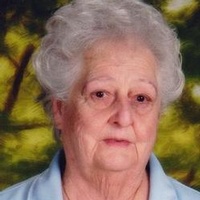 Vivian Joy Fredrickson, 83, of Buhl passed away January 6, 2015 unexpectedly from a short illness.
She was born September 14, 1931 in Bancroft, Idaho to Robert and Woodrow Lawrence. Vivian was the first of 5 daughters. She grew up and attended schools in Idaho and Montana. In 1948 she married George Hendricks in Pocatello where the first of their three children, Robert, was born. They moved to Las Vegas, Nevada where Michael and Connie were born. They were later divorced. In 1963 Vivian married the love of her life, Frank Fredrickson. Vivian enjoyed being involved in all of her children's activities. Vivian and Frank moved to Alaska where they owned and operated two businesses. Later they moved to northern Idaho to be closer to family and enjoy their retirement. They were happily married until Frank's death in 1992.
Vivian was employed in many capacities throughout her life, including numerous years at Electrolux. Vivian loved to do for others and was there to help out at a moment's notice. She was a Foster Grandparent at Popplewell Elementary, worked with the Head Start program in Buhl and lastly was a Senior Companion.
Vivian was an active decorated member of the Moose for nearly 50 years. Vivian chose to foster children through the Moose Heart program. She was also a faithful and dedicated member of the LDS church.
Vivian is survived by her children, Michael Hendricks, Connie (Rick) Smith, Linda Roths, and Karen (Larry) White; Grandchildren, Stacey (Michael) Haverstock, Bobby (Kristin) Hendricks, Sara Leavitt, Frank Brown, Russell Hendricks and Aaron Hendricks; Five great grandchildren; Sisters, Jean Radke, Roberta (Vernal) Sheen and Georgia Lee Harrison; Several nieces, nephews and cousins.
She will be missed by ALL.
She was preceded in death by her parents, husbands, mother-in-law Eleanor McFarlane, son Robert K. Hendricks and infant sister Mary Lou Lawrence.
A celebration of life will be held 11:00 a.m. Saturday, January 17, 2015 at the LDS church at (1001 Fair Street) in Buhl.
In lieu of flowers, donations in memory of Vivian can be made to Moose Heart or the Buhl Quick Response Unit.
Condolences and memory sharing may be left for the family at www.farmerfuneralchapel.com or by e-mailing [email protected]

To order memorial trees or send flowers to the family in memory of Vivian Fredrickson, please visit our flower store.