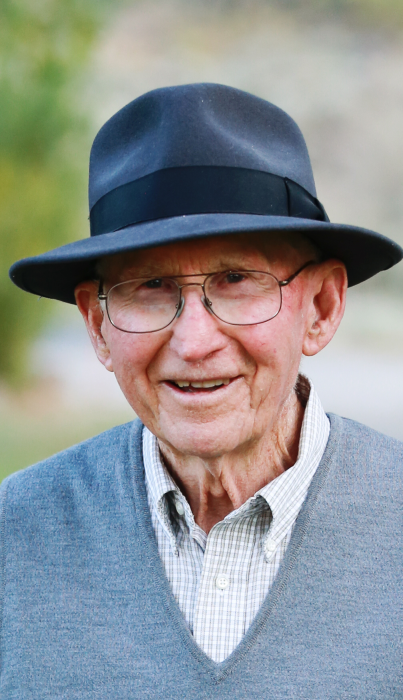 Wilbur “Bud” Hill was born April 2, 1924 in Buhl, Idaho where he lived his entire life until passing away on July 1, 2020 in Buhl, Idaho.  Bud was an avid hunter, fisherman, marksman, pilot, survivor of a commercial airline crash, Good Sam member, avid traveler, and had a full life of work, pleasure, and adventure.

Bud lived his entire life as a rare paragon of wisdom, humanity, and compassion.  He was born to Charles and Pearl Hill.  Bud’s siblings were Marylin “Bo” Potucek, Jack Hill, John Hill, Betty Jeppsen, Charlie Hill, and Anita “Tootie” Honcik.  He had 21 nieces and nephews in addition to many others who considered him “Uncle Bud”.

Bud and Bernyce (Musser) Hatfield were married in 1962 and had a fairytale marriage until Bernyce’s passing in 2007.  He treated Bernyce like a princess and made all her dreams come true on a little farm with a quaint lava rock home ensconced in pine trees and flowers.  Over the years, Bud became the father of Bernyce’s only son, Max Hatfield, and grandpa to Tiffany (Hatfield) Fraser and Kimberley Hatfield.  He is great grandpa to Max Fraser and Sean Fraser.  He brought a sense of family to all of their lives.

As the oldest child in the Hill family, Bud was the anchor and mentor of his brothers and sisters and their children.  So many people referred to him as “Uncle Bud” that it would take a special edition of the paper to list them all.  Bud always mentored by his serene kindness and example, but never by dictate or imperative.  His endless patience and kindness were known throughout the community.  He was a meticulous farmer and steward of the land.  No obituary would be complete without mentioning his nephew John “Bart” Hill who took over his farm when he retired.  Bart farmed his land for 30 years and became a large successful farm operator and owner himself.  Another important person in Bud and Bernyce’s life was Loretta Shriver who helped care for both Bud and Bernyce and their home for over 30 years.  She really became part of the family.

There are countless people that were important to Bud and part of his life, that it is impossible to mention all of them here.  He not only was a benefactor to many local people, but internationally to people in Finland, France, and more.

Due to the COVID-19 pandemic, Bud did not wish to risk exposure of his friends and family with a traditional service. There will be a private family viewing for Bud held from 10:00 am until 12:00 pm with a public viewing following from 1:00 pm until 6:00 pm, Tuesday, July 7, 2020 at Farmer Funeral Chapel, 130 9th Ave North, Buhl.

In lieu of flowers, please make a donation in his honor to your favorite charity.

All of those who knew Bud are encouraged to share comments on Bud’s webpage at www.farmerfuneralchapel.com.

To order memorial trees or send flowers to the family in memory of Wilbur "Bud" Hill, please visit our flower store.